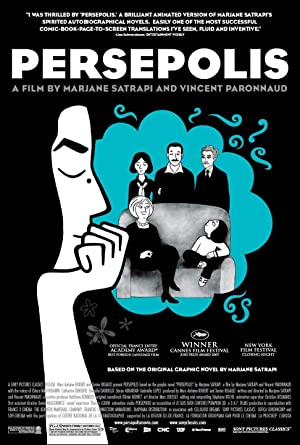 Based on Marjane Satrapi's graphic novel about her life in pre and post-revolutionary Iran and then in Europe, this black-and-white animation follows the coming-of-age story of a precocious and outspoken young Iranian girl that begins during the Islamic Revolution.

We meet nine-year-old Marjane when the fundamentalists first take power, forcing the veil on women and imprisoning thousands. Then wee see her as she cleverly outsmarts the "social guardians" and discovers ABBA, punk and Iron Maiden, while living with the terror of government persecution and the Iran/Iraq war. Marjane's journey then moves on to Austria where, as a teenager, her parents send her to school in fear for her safety and she has to combat being equated with the religious fundamentalism and extremism she fled her country to escape. Marjane eventually gains acceptance in Europe, but finds herself alone and horribly homesick, and returns to Iran to be with her family, though it means putting on the veil and living in a tyrannical society. After a difficult period of adjustment, she enters art school and marries, continuing to speak out against the hypocrisy she witnesses. At age twenty-four, she realizes that while she is deeply Iranian, she cannot live in Iran. She then makes the heartbreaking decision to leave her homeland for France, optimistic about her future, shaped indelibly by her past.

Plot summary from IMDb: In 1970s Iran, Marjane 'Marji' Statrapi watches events through her young eyes and her idealistic family of a long dream being fulfilled of the hated Shah's defeat in the Iranian Revolution of 1979. However as Marji grows up, she witnesses first hand how the new Iran, now ruled by Islamic fundamentalists, has become a repressive tyranny on its own. With Marji dangerously refusing to remain silent at this injustice, her parents send her abroad to Vienna to study for a better life. However, this change proves an equally difficult trial with the young woman finding herself in a different culture loaded with abrasive characters and profound disappointments that deeply trouble her. Even when she returns home, Marji finds that both she and homeland have changed too much and the young woman and her loving family must decide where she truly belongs.