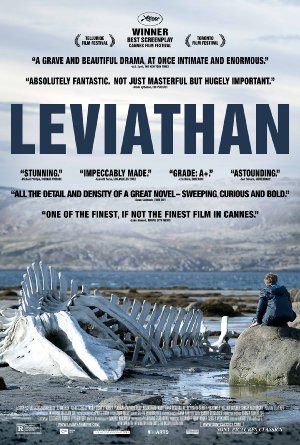 Kolya, a hard-headed car mechanic living in a remote coastal town in Russia, finds himself in a dispute with a local crooked mayor who is set on taking his land. He calls upon his old friend Dima, who is an influential lawyer in Moscow for help to fight against the politician. As the tension escalates between the middle-class citizen and the corrupt politician, the film proceeds to tell a series of events that turn sourer each time.

Loosely based on the biblical figure Job, who shares some similarities with  the main character, Zyvagintsev's masterpiece is a tragedy charged with heavy feelings, dealing with strong themes, such as corruption, religion, darkness of human nature and social critic. Superb photography, terrific acting, spine chilling music, a solid plot and plenty of dark humor make Leviathan a truly rewarding experience.

Plot summary from IMDb: In a Russian coastal town, Kolya is forced to fight the corrupt mayor when he is told that his house will be demolished. He recruits a lawyer friend to help, but the man's arrival brings further misfortune for Kolya and his family.