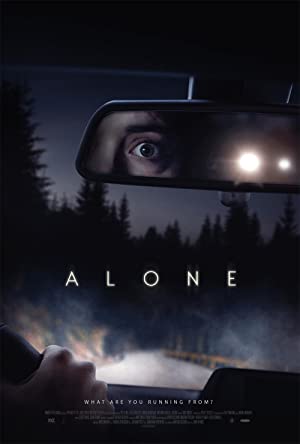 "What Are You Running From?"

Jules Willcox (Netflix’s Bloodline) stars in Alone as Jessica, a grief-stricken young widow who flees the city in an attempt to cope with the loss of her husband. When Jessica is tracked on the highway and then kidnapped by a mysterious man, she wakes to find herself locked in a cabin in the Pacific Northwest. She soon escapes into the untamed wilderness with only her wits to rely on for survival as she is pursued by her murderous captor.

The key cast includes Marc Menchaca (Ozark, The Outsider) as The Man, and Anthony Heald (The Silence of the Lambs). Directed by John Hyams, this English-language remake of Mattias Olsson's 2011 Swedish film Gone is a terrifying masterclass in primal suspense.

Plot summary from IMDb: A recently widowed traveler is kidnapped by a cold blooded killer, only to escape into the wilderness where she is forced to battle against the elements as her pursuer closes in on her.