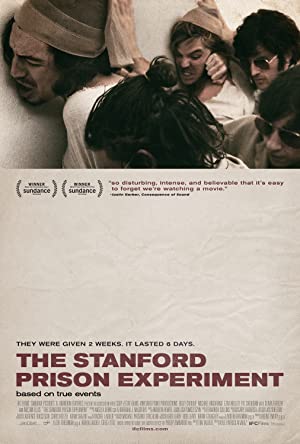 What happens when a college psych study goes shockingly wrong? In this tense, psychological thriller based on the notorious true story, Billy Crudup stars as Stanford University professor Dr. Philip Zimbardo, who, in 1971, cast 24 student volunteers as prisoners and guards in a simulated jail to examine the source of abusive behavior in the prison system. The results astonished the world, as participants went from middle-class undergrads to drunk-with-power sadists and submissive victims in just a few days.

Winner of two awards at the Sundance Film Festival, including Best Screenplay, and created with the close participation of Dr. Zimbardo himself, The Stanford Prison Experiment is a chilling, edge-of-your-seat thriller about the dark side of power and the effects of imprisonment. Featuring an extraordinary cast of rising young actors, including Ezra Miller, Olivia Thirlby, Tye Sheridan, Keir Gilchrist, Michael Angarano, and Thomas Mann.

Plot summary from IMDb: In 1971, twenty-four male students are selected to take on randomly assigned roles of prisoners and guards in a mock prison situated in the basement of the Stanford psychology building.