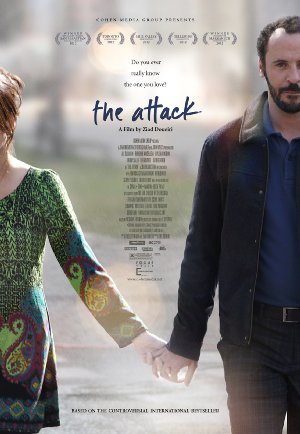 "Do you ever really know the one you love?"

A politically-charged Lebanese-French drama with a pretty provocative premise: Amin is a happily married and successful Palestinian surgeon living in Tel Aviv, who one day finds out about his wife of 15 years' dark secret, when, after a suicide bombing that kills seventeen people at a restaurant in the city, he is informed that she is the one responsible for the attack.

Based on a novel by Algerian writer Mohammed Moulessehoul, the film isn't really about terrorism, but it's pretty good at depicting the Israeli-Palestinian conflict.  It's also a thought-provoking drama that even though it's fictional, feels as real as an international headline.

Plot summary from IMDb: Dr. Amin Jaafari is an assimilated Arab surgeon who seems to have it all with a promising career with honors among the Israelis in Tel Aviv. That all changes after a devastating terrorist suicide bombing and his beloved wife, Siham, is found among the dead as the primary suspect. Although initially refusing to accept that as Shin Bet interrogates him, Amin comes to realize the allegations are true. Now, the ostracized Amin resolves to find out on his own why Siham had so strong a conviction that she kept secret from him. However, the answers prove hard to come by and the truths involved have a terrible pain of their own.