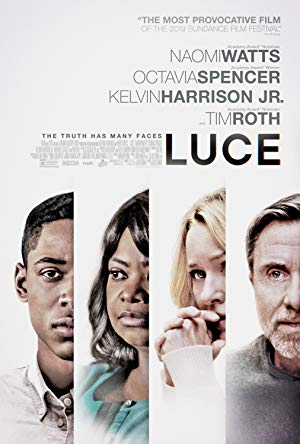 "The Truth Has Many Faces."

It's been ten years since Amy and Peter Edgar (Naomi Watts and Tim Roth) adopted their son from war-torn Eritrea, and they thought the worst was behind them. Luce Edgar (Kelvin Harrison Jr.) has become an all-star student beloved by his community in Arlington, Virginia. His African American teacher, Harriet Wilson (Octavia Spencer), believes he is a symbol of black excellence that sets a positive example for his peers. But when he is assigned to write an essay in the voice of a historical twentieth-century figure, Luce turns in a paper that makes an alarming statement about political violence. Worried about how this assignment reflects upon her star pupil, Harriet searches his locker and finds something that confirms her worst fears.

Plot summary from IMDb: A married couple is forced to reckon with their idealized image of their son, adopted from war-torn Eritrea, after an alarming discovery by a devoted high school teacher threatens his status as an all-star student.