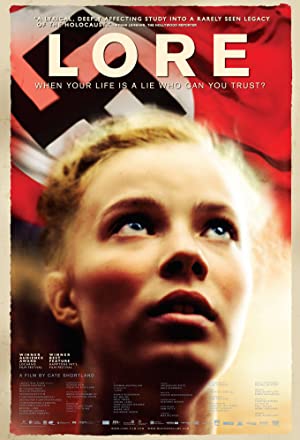 "When your life is a lie, who can you trust?"

Left to fend for themselves after their SS officer father and mother, a staunch Nazi believer, are interred by the victorious Allies at the end of World War II, five German children undertake a harrowing journey that exposes them to the reality and consequences of their parents' actions. Led by the eldest sibling, 14-year old Lore (striking newcomer Saskia Rosendahl), they set out on a journey across a devastated country to reach their grandmother in the north. After meeting the charismatic Thomas, a mysterious young refugee, Lore soon finds her world shattered by feelings of both hatred and desire as she must learn to trust the one person she has always been taught to hate in order to survive.

Lush cinematography and an evocative, haunting mood infuse this unconventional take on the Holocaust legacy with unforgettable impact.

Plot summary from IMDb: As the Allies sweep across Germany, Lore leads her siblings on a journey that exposes them to the truth of their parents' beliefs. An encounter with a mysterious refugee forces Lore to rely on a person she has always been taught to hate.