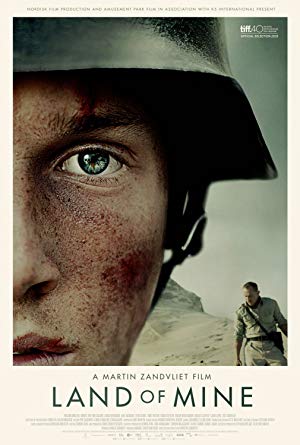 "They survived World War II. Now they have to survive the clearing."

As World War II comes to an end, a group of young German POWs are captured by the Danish army and forced to defuse and clear 2 million land mines from the Danish coast. With little to no training, the boys soon discover that the war is far from over. Inspired by true events, Land Of Mine exposes the untold story about the young men who faced overwhelming odds in a post-war world.

Plot summary from IMDb: SPOILER: In 1945, in Denmark, after the defeat of Germany, the tough veteran Sergeant Carl Rasmussen is assigned by Lieutenant Ebbe Jensen to defuse and remove 2.2 million mines in the Danish West Coast to make the beaches safe. Carl receives a group of teenage Germans prisoners of war to clear mines. With the formal promise of Ebbe, Carl tells to the youngsters that when the task is accomplished, the survivors would be released to return to Germany. After the initial hostility with the enemy, Carl realizes that the POWs are too young and befriends the boys. But when a mine in a clear area blows up his dog, Carl forces the boys to walk together on the safe areas to check whether any mine was left behind. Months later, the survivors complete their task but Ebbe sends them to another mined field. What will Carl do?