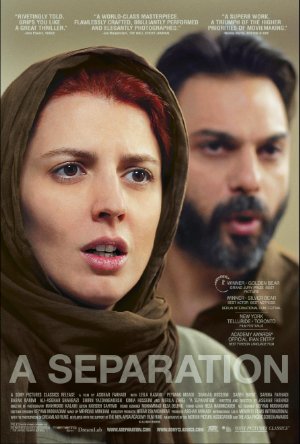 "Lies may lead to truth."

Simin and Nader, a married middle-class couple living in Tehran, separate from each other and want to get a divorce, as she wants to leave the country in search for a better life, and he refuses to follow her because he doesn't want to leave behind his Alzheimer's-suffering father. To prevent them from leaving each other, their 11-year-old daughter Termeh chooses to stay with her father, knowing that her mother wouldn't leave Iran without her. Tensions in their lives mount, as Nader confronts some more issues, caused by the woman hired to take care of his father in his absence, making realize that there is more on the line than just his marriage.

The brainchild of writer-director Asghar Farhadi, A Separation is an intricate portrait of a fractured relationship and an insightful examination of theocracy, domestic rule and the politics of sex and class, making it a bold masterpiece of modern Iranian film-making.

The film was very well received at the box office and by critics, having won both the Academy Award and the Golden Globe for Best Foreign Language Film, and the Golden Bear for Best Film at the Berlin International Film Festival.

Plot summary from IMDb: Nader (Peyman Moaadi) and Simin (Leila Hatami) argue about living abroad. Simin prefers to live abroad to provide better opportunities for their only daughter, Termeh. However, Nader refuses to go because he thinks he must stay in Iran and take care of his father (Ali-Asghar Shahbazi), who suffers from Alzheimers. However, Simin is determined to get a divorce and leave the country with her daughter.